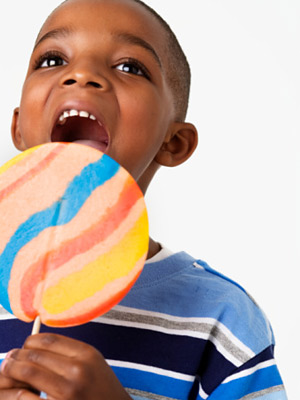 For years, doctors have speculated that certain foods may have something to do with ADHD. Although much research has been done on the subject, it's still not believed that food actually causes ADHD. What some foods do seem to do, however, is worsen ADHD symptoms or affect behavior that mimics the signs of ADHD in children. "Excessive caffeine and excessive use of fast foods and other foods of poor nutritional value can cause kids to display behavior that might be confused with ADHD," said Frank Barnhill, MD, an expert on ADHD and the author of "Mistaken for ADHD." Read on for a list of foods that have been linked with ADHD symptoms.

Candy is loaded with sugar and artificial colors, which is a bad combination when it comes to children with ADHD who often need to follow an ADHD diet. Both of these common ingredients have been shown to promote ADHD symptoms — namely hyperactivity — in studies. "With the high content of sugar and artificial coloring, candy is a huge contributor to ADHD," said Howard Peiper, author of "The ADD and ADHD Diet."

If you have ADHD, consider eliminating soda. (And even if you don't have ADHD, saying no to soda is a good idea anyway.) These sweet drinks often have many of the same sugars and sweeteners that make candy a bad idea for kids on the ADHD diet. Soda also has other ingredients that worsen ADHD symptoms, such as high-fructose corn syrup and caffeine. "Excessive sugar and caffeine intake both cause symptoms of hyperactivity and easy distractibility," said Dr. Barnhill. One 2013 study also found that 5-year-old children who drank sodas were more likely to show aggression and social withdrawal.

Although fruits and vegetables are healthy choices for an ADHD diet, some frozen varieties can contain artificial colors, so check all labels carefully. Barnhill said these frozen foods can exacerbate ADHD symptoms for another reason, as well: "Foods treated with organophosphates for insect control have been shown to cause neurologic-based behavioral problems that mimic ADHD and many other behavior problems," he said.

Cake mix and frosting contain the high amounts of sugar and artificial colors that can lead to hyperactivity and other ADHD symptoms. Naheed Ali, MD, ADHD expert and the author of "Diabetes and You: A Comprehensive, Holistic Approach," added that these products are often also loaded with several artificial sweeteners. "When frosting and cake mix contain artificial sweeteners, they increase the risk of ADHD symptoms more than natural sweeteners would," he says.

Energy Drinks are becoming increasingly popular among kids, especially teens. Unfortunately, they also have a veritable treasure trove of ingredients that can worsen ADHD symptoms: sugar, artificial sweeteners, artificial colors, caffeine, and other stimulants. "Energy drinks are high on the list of things that cause teens to display behaviors mimicking ADHD," said Barnhill. They have no place in a healthy ADHD diet.

6. Fish and other seafood

Dr. Ali said that eating fish and other seafood with trace amounts of mercury can exacerbate ADHD symptoms in the long term. Some of the worst culprits are shark, king mackerel, swordfish, and tilefish. "Mercury, like cellulose, is extremely hard to digest and can accumulate in the brain over time," explained Ali. "This can lead to hyperactivity." Talk to your doctor or ADHD nutritionist about the best types of fish to include in your ADHD diet.

Many children with food sensitivities can exhibit ADHD symptoms after they are exposed to certain foods. Some of the common foods that can cause ADHD reactions include milk, chocolate, soy, wheat, eggs, beans, corn, tomatoes, grapes, and oranges. If you suspect a food sensitivity may be contributing to your child's ADHD symptoms, talk to your doctor about the possibility of trying an elimination diet.